This area was continuously occupied from 9,000 years ago to A.D. 700. The only proof of human occupation from that long ago, rock art and tools, have been found throughout the site. Ancestors of modern Puebloan people arrived on the mesa tops to dry farm, but they left when the environment changed. About 900 years ago new migrants moved into small, single-family dwellings near the best-watered soils. In the 1200's, farmers from Mesa Verde migrated here, but were gone by the 1300's to head southward. Navajo oral tradition holds that their ancestors lived here in the time of the Puebloans. 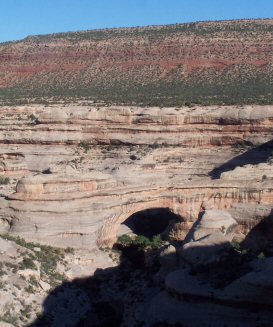 Millions of years ago, these sandstones were deposited under a vast inland sea that covered most of middle Utah. Then the stone was uplifted as part of the Colorado Plateau, and erosional forces gradually created today's canyons and landscapes. The stone most visible in the canyon walls is white, from sand laid down on beaches at that great sea. The bridges are formed by the erosion of meandering streams. When a river forms a great looping meander, almost circling back on itself, it can create a thin rock wall, with rushing water on either side. Raging flood waters scrape away at both sides, and eventually the river breaks through and takes the shorter course under the new bridge.

Three rock spans, of different ages and sizes, stand as classic examples of the life-cycle of bridges. Sipapu Bridge is the second largest natural bridge in the world (second only to Rainbow Bridge in Glen Canyon). It is so tall, it would nearly house the dome of the United States Capitol! The trail down to the bridge is 1.2 miles round trip, and takes about an hour. 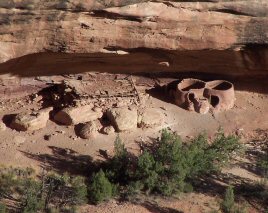 Kachina is a massive bridge and is considered the youngest of the three because of the thickness of its span. It's difficult to see this one from the overlook by the circular drive, so for a best view you must take the trail down to the canyon bottom. The pile of boulders under the far side of the bridge are from a rock fall in 1992, when about 4,000 tons of rock broke off the bridge. The trail is 1.5 miles round-trip, and takes about an hour.

Owachomo Bridge offers a dramatic span, as it is the narrowest of the three bridges, although the other two are higher and have a greater span. It's also the most accessible from your car, as the trail is only 0.4 miles round-trip and takes only 20 minutes.

The Horsecollar Ruin earns its name from the shape of the doors. It's believed this room was used as a granary, though the reason for the unusual shape of the doors is still unknown. The trail from the paved road to the Ruin overlook is only 0.6 miles round-trip, and takes about 30 minutes. This is an Ancestral Puebloan cliff dwelling in a large alcove near the bottom of the canyon. To the left of the granaries is a kiva, the community's ceremonial meeting room. This site was built about 700 years ago, then shortly thereafter abandoned. It was rediscovered by non-Indians in the late 1880's, then apparently forgotten once again. This was probably due to the fact that it cannot be seen from the river bottom, and is nearly hidden from the rim top. Finally, in 1936, long after the Park was established, it was rediscovered by Zeke Johnson, the first curator of the Monument. 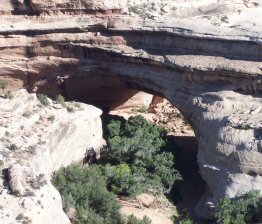 To truly appreciate these bridges, visitors need to get out of their cars and take the short hikes to the bottom of the canyon. The largest elevation change is 500 feet, for Sipapu Bridge. The other trails are even easier. Do remember, however, that Natural Bridges sits at an elevation of 6,500 feet above sea level. The visitors center is spacious and simple, the staff is helpful and friendly. This is a relatively small Park, and the loop drive that takes you to all trailheads is only nine miles in circumference. It's easy and dramatic.

There's a Junior Ranger program for the kids. Remember, always ask a Ranger first if they have the necessary paperwork; you don't want to have disappointed kids, like I did at Cedar Breaks when they ran out.

Natural Bridges is truly far away from it all. From most any place in Utah, take I-40 to Crescent Junction and exit 180. Go south on Highway 191, through Moab and Monticello, and just south of Blanding go west on Highway 95. It's a scenic 35-mile drive to the Monument. 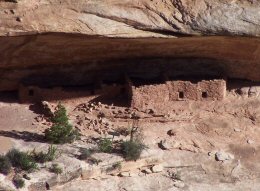