Though less than ten inches of rain a year fall in many parts of the Park, you may find desert bighorn sheep, coyotes, foxes, squirrels, ravens, hawks and smaller birds among the native wild animals. Most of the roads in the Park are unpaved; to truly explore Canyonlands, a 4-wheel-drive vehicle is a must. But several paved roads lead to fantastic viewpoints in several places around the 527-square-mile park. 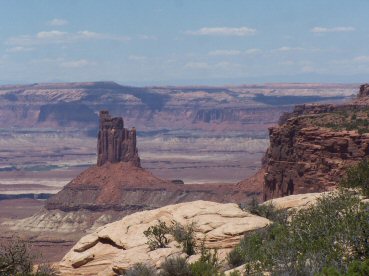 Canyonlands' history begins over 300 million years ago, when this whole area was a vast low-lying basin. Periodically the basin filled with walty sea water and when it evaporated, thick layers of salt were left. Later advancing and retreating oceans left their own layers of silt and deposits from river runoffs. Over millions of years, pressure from layers above and percolating ground water cemented the buried sediment into solid rock. About 15 million years ago, the western edge of the continent slowly began to rise. This newly elevated highland includes most of present-day Utah, western Colorado, northern New Mexico, and northern Arizona. Together it's known as the Colorado Plateau. As the plateau rose, the Colorado River sped downhill and cut canyons thousands of feet deep through solid rock.

The Islands in the Sky section of the Park is perhaps the most easily visited, as the entrance isn't far from the mountain bike mecca of Moab, Utah. Views from this area reach to the depths of the Green and the Colorado rivers, all the way to the mountaintops to the east and west, and visibility is often 100 miles to the horizon. Islands is a broad, level mesa wedged between the two rivers, and offers dramatic examples of how water and gravity effect erosion. Visitors can look down to the White Rim, a nearly continuous sandstone bench 1,200 feet below the Island. Another 1,000 feet beneath that are the rivers, shadowed by sheer canyon cliffs. 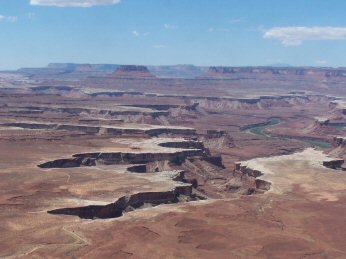 The Needles section of the Park is a startling landcape of sculptured rock spires, arches, canyons, grabensa nd porholes. The main sight are The Needles themselves -- rock pinnacles banded in red and white colors. But this area is filled with a fascinating collection of rock spans, grassy meadows and landforms with such names as Devils Kitchen, Angel Arch, Elephant Hill, Gothic Arch, and Paul Bunyans Potty. Throughout all this country the Ancestral Puebloan Indians once ranged, growing corn, squash, and beans, hunting deer and bighorn sheep, and gathering seeds, fruits, and roots. This culture was part of the same group of people who built the great stone pueblos of Mesa Verde in Colorado and Chaco Canyon in New Mexico. Traces of their lives can be found throughout The Needles.

The Maze section is perhaps the wildest and definitely the most remote and inaccessible areas of the United States. The Maze is a fantastic jumble of canyons that's like 30 square miles of a jigsaw puzzle. People come here and find broken rock, little water, and stunted junipers, but most of all is solitude, silence, and challenges to one's self-reliance. There weirdly shaped towers, walls, buttes and mesas; there are gostly painted figures left by American Indians at least 2,000 years ago. 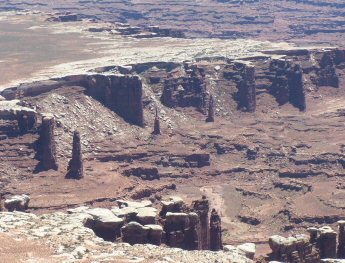 All of the pictures here are of the Islands section. Another time I'll get a chance to see The Needles, and maybe even the Maze. But the views from Dead Horse Point State Park, right next to Canyonlands, and the views from Grand View Point Overlook are just fantastic. Miles and miles of canyons, white-topped mesas, ah it's a beautiful thing. I really am a nature geek. It's difficult to get to all three main areas of the park unless you take several days to do it. The areas are separated by rivers and canyons, see, and there are no bridges, see, so that means lots of driving.

The eroded canyon walls detail millions of years of history. Don't forget to see the visitors center, although the Islands center leaves a little to be desired. The staff is helpful, as always, but the center has just the bare minimums. Nevertheless, when I visited in July, there were hardly any people around at all. It was pretty hot, but not impossible, and I really enjoyed the views of the distant La Sal mountains and the Green River down below. 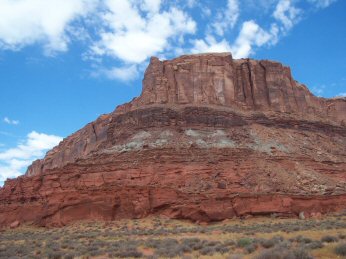 To get to Islands, from Moab, Utah - go north on Highway 191 xx miles. Go west on Highway 313 and follow it for xx miles to the visitors center.

To get to The Needles, from Moab or Monticello Utah -- take Highway 191 to Highway 211. Go west about 40 miles to the visitors center.

To get to The Maze, take Highways 24 or 95 to access any number of two- and four-wheel drive routes east. There's no visitors center for this area, just a ranger station, and no amenities. 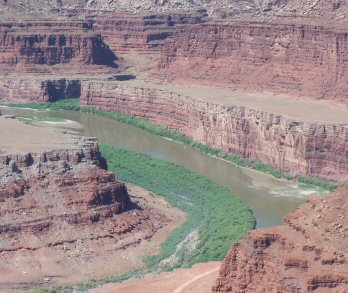